By Mercedes-Benz of Cary on November 6, 2014 in Reviews 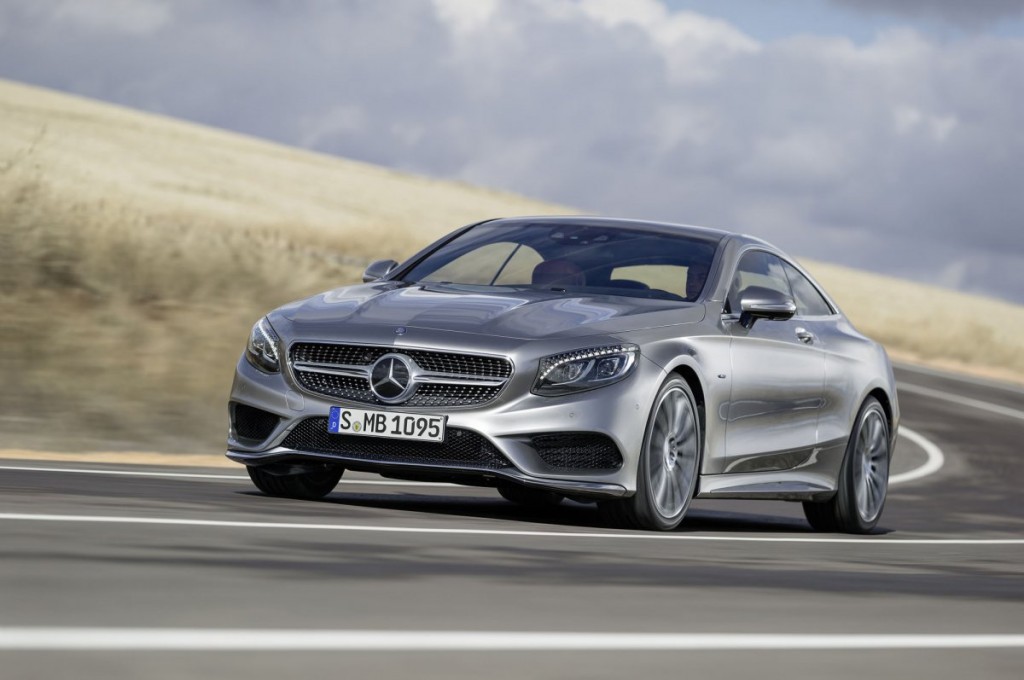 It wasn’t so long ago that we were test-driving the S-Class Sedan, the flagship of flagships and a car that makes the driver feel unnecessary thanks to its onboard adaptive cruise control. It’s a car that makes anyone lucky enough to be sitting in one feel inordinately special on account of the luxury materials that furnish it and the luxury principles that inform its design. While that car is no slouch, the driving experience is all about comfort.

Our preconception of the S-Class Coupe is that it must be driven to provide maximum delight. We scheduled a test-drive at Mercedes-Benz of Cary to test the verity of our instinct.

The showroom doors were wide open on one of the last pristine days of autumn, right as the leaves were in full color and the temperature would have satisfied Goldilocks. We walked in and were immediately greeted by a familiar sales associate who shall not be named. They would say that this review is about the car, not them, and they would be correct. 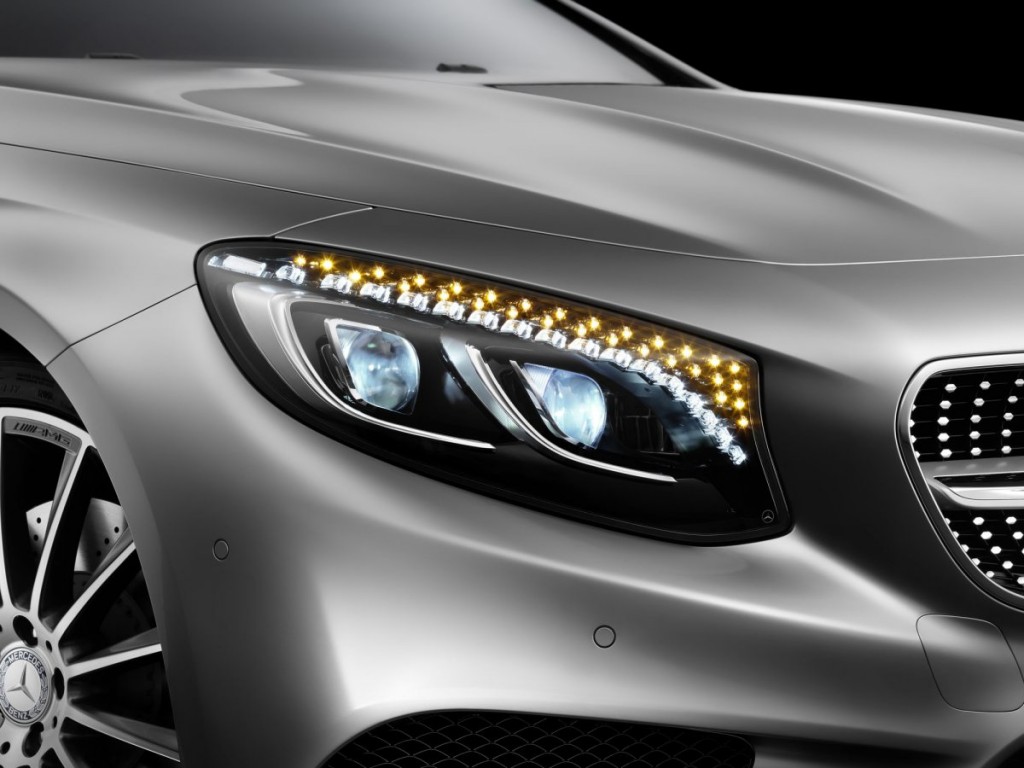 Parked diagonally across two spaces out front, the 2015 S550 Coupe was already running, its engine idling and the running lights twinkling. Those lights might be the most immediately noticeable feature of this car. Each headlamp contains forty-seven Swarovski crystals, one capping each point in the running lights and the turn signals. Not every S-Class Coupe has the crystal treatment, but because this was an Edition 1, Mercedes-Benz pulled out all the stops. 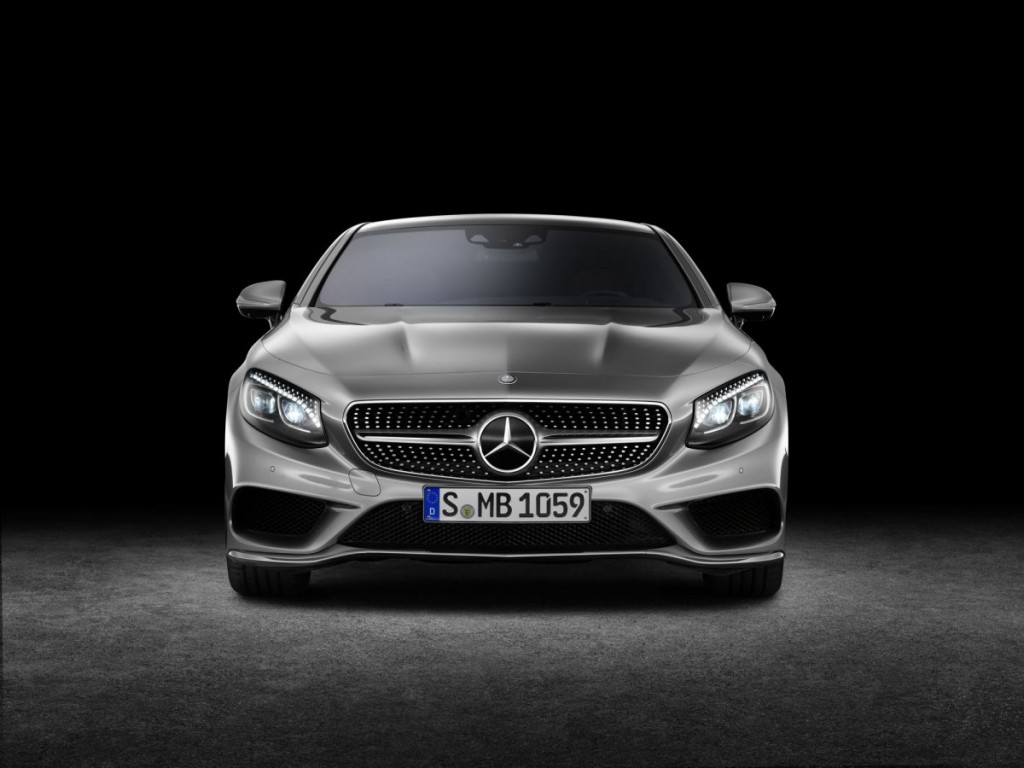 We were told that the front end of the car is meant to look angry so that drivers on the autobahn would want to move out of the way when they see it in the rearview mirror. Compared to the sedan, the headlamps give the car’s eyes a more severe frown, although the main difference maker is a more angular grille and the scowling air intakes underneath. The chrome air dam at the bottom completes the intimidating visage. Going back to the grille, the metallic hexagons radiating out from the large Mercedes-Benz emblem are hand placed in order to create a three-dimensional effect. The badge is there not only to remind people who made the car but also to conceal one of the main radar sensors used for driver assistance. 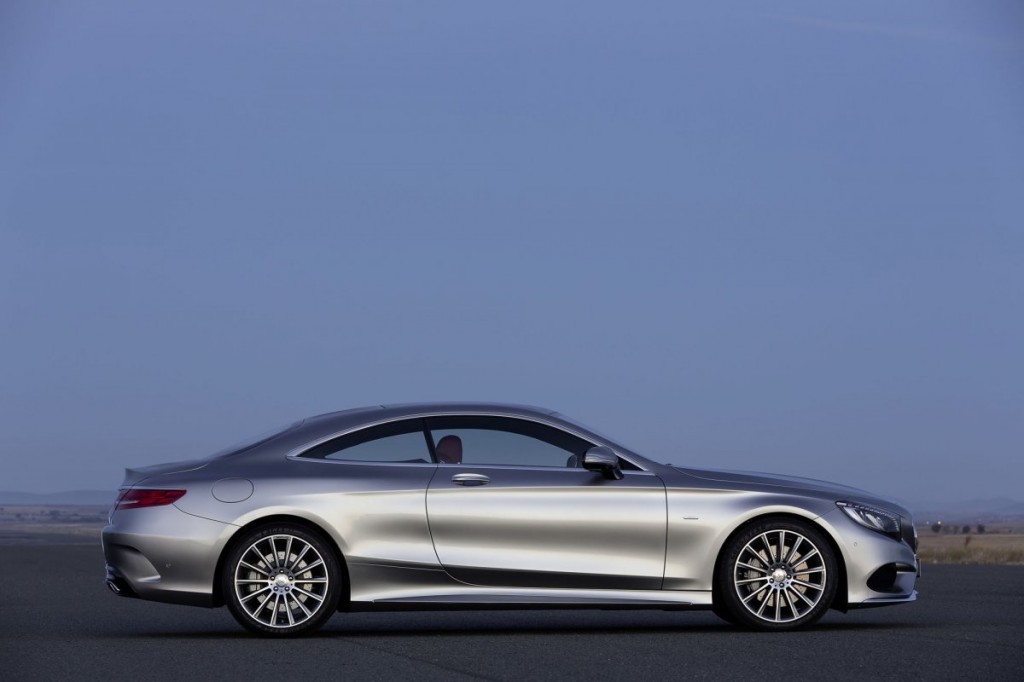 In profile, the S-Class Coupe stretches out, noticeably sans B-pillar. Mercedes-Benz considers this absence a paragon of coupe design and is the only brand to have maintained the tradition since 1961. Moving to the rear, they’ve totally eliminated the trunk handle, and the Mercedes-Benz badge flips up to reveal the rear-view camera.

With AMG® Sport Package upgrades, this S-Class Coupe looks nothing short of stunning on the outside, but the Edition 1 highlights also carry over to the interior where designo® has put forward one of their best efforts yet. Most of the interior is covered in hand-stitched Bengal Red and Black Nappa leather. The rest is hand-lacquered Piano Black wood appliqués and aluminum accents. The level of detail and craftsmanship necessary to create this interior can extend the assembly time of one of these cars by up to four weeks, but it’s well worth the wait once you’ve taken a seat. 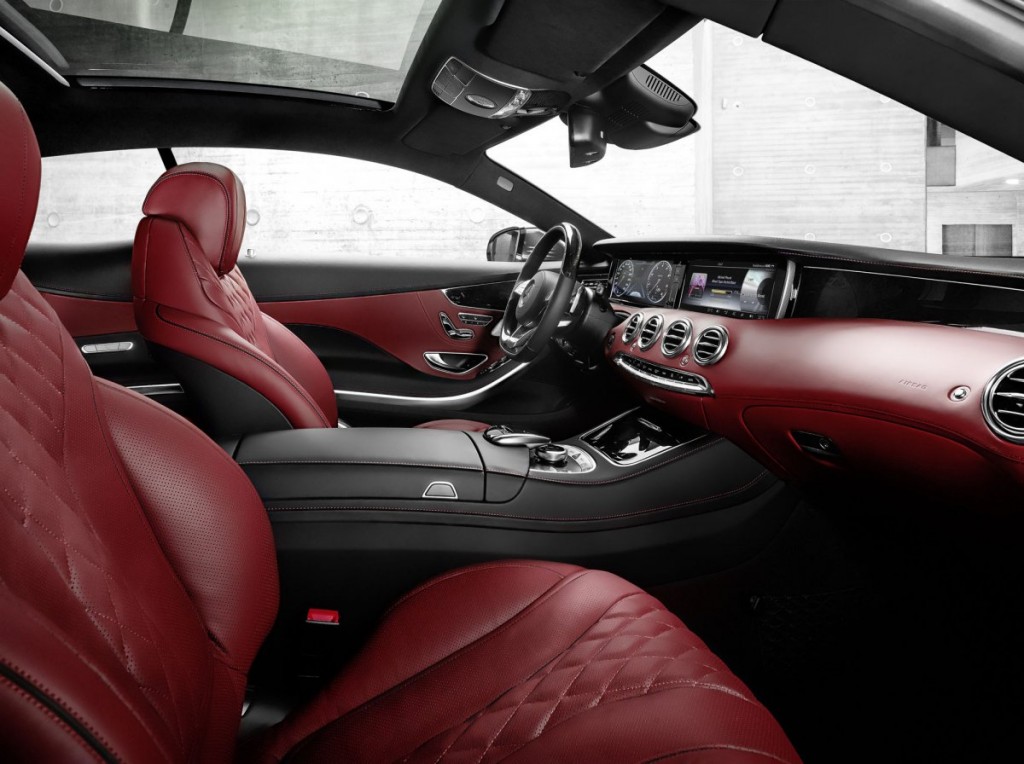 We took the first shift riding shotgun, which is fine by us. We find that with a car like this one, it’s helpful to observe how to drive it before actually taking the wheel.

Tempting as it is to roll down the windows in a coupe, we kept them up because we wanted to test one of the bolder claims Mercedes-Benz has made: That this is the quietest gas-powered car on the market in terms of interior noise.

We didn’t have to ride for long to agree. It’s library quiet inside this car. Even the sound of tires on the road is impressively hushed. Double-paned laminated glass and a host of other damping materials and technologies help to reduce NVH (noise, vibration, harshness). You can hear the engine when the driver accelerates, but it isn’t a harsh sound, and it certainly isn’t electronically synthesized.

Speaking of the engine, our companion was driving along at moderate speeds through the Cary auto mall when he asked us “Are you ready?”

We had ridden with him before, so we knew to grab the door handle before saying “Yes.” Our head still hit the seatback as the coupe sprinted forward. Consider that this car is lighter than the S-Class Sedan, yet it has the same turbocharged V8 engine, good for the same 449 horsepower and 516 foot-pounds of torque. If the sedan is a yacht, the S-Class Coupe is a speedboat.

He didn’t make us wait long before pulling over and letting us take the wheel. The steering wheel, with its paddle shifters, three-spoke configuration, and sport grip, reinforced our earlier notion that this is a driver’s car. Meanwhile, the automated seatbelt extender reminded us that we were still sitting in a high end luxury automobile. 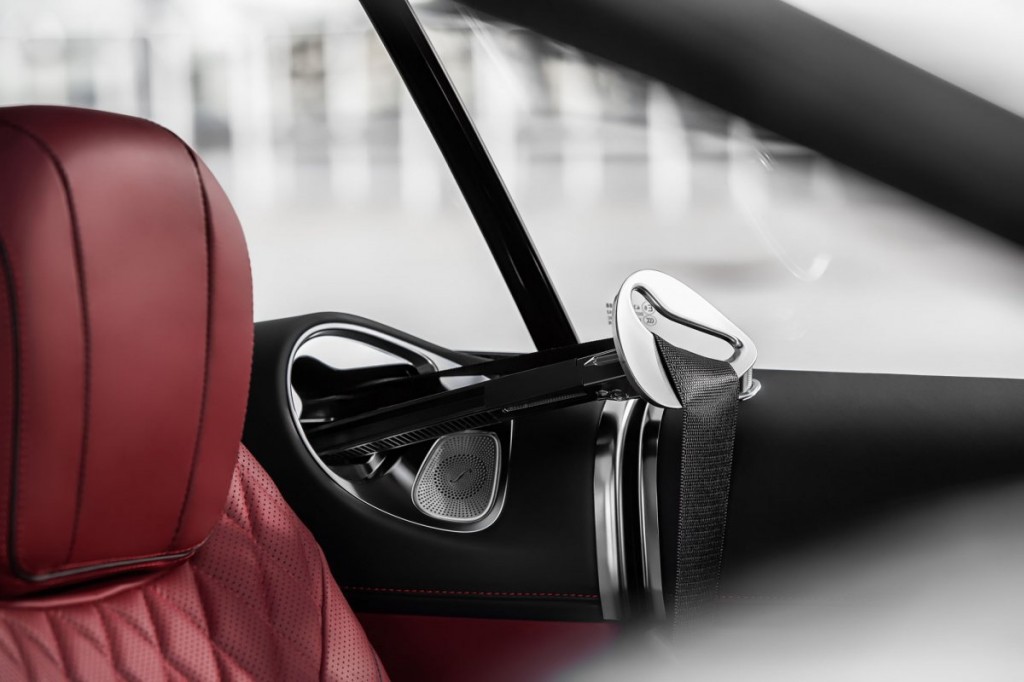 Our guide started us off in the comfort settings for throttle response and suspension as we pulled out of the office complex. In standard mode, the S-Class Coupe glides over the road, feeling more like it’s hovering an inch above the ground. We mentioned it before, but this car was equipped with the same technology that allowed the S-Class Sedan to all but drive itself, with cameras and radars that keep the car in its lane and accelerate or decelerate automatically. If you want to know more about how that system works, you can read our review of the other car because we didn’t use any of that this time. We had every intention of piloting this car ourselves. 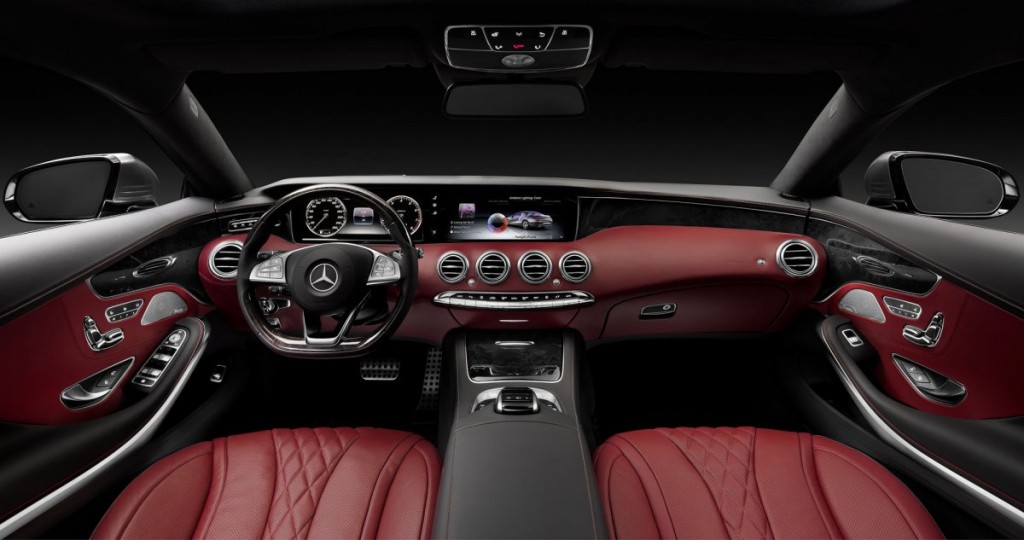 So we switched over to the Sport settings as we pulled up to a stop sign, to which the sales associate said, “This is a great place to punch it.”

We put our foot down and turned the wheel. The S-Class Coupe doesn’t even think about spinning out. Equipped with Mercedes-Benz’s 4MATIC® all-wheel drive, the car maintains near perfect traction on pavement. There’s about a forty-to-sixty split between the front and rear-wheels, but that power can be transferred to different wheels automatically based on current needs. We arrived at the next stop-sign quickly, prompting us to ask if this, too, was a great place to punch it. Yes it was.

The engine sounds terrific, which makes us yearn to hear what the S63 AMG® sounds like. You hear a throaty rumbling when you’re inside the car, and if you’re outside it when someone revs the engine, it projects an authoritative bark from the exhaust. We were never wanting for power, and in fact, found the car jolting forward at the lightest press of the throttle. It so desperately wants to accelerate, and we’re sure it was just as frustrated as we were to be stuck behind a school bus.

(As an editorial note, the rule seems to be that the more powerful the car we’re test-driving, the more cumbersome the traffic will be surrounding us.)

Our S-Class Sedan test-drive saw us spend most of our time on the highway, showcasing how smooth a ride it is on longer trips. With the coupe, we stuck almost exclusively to the winding tributaries off of Tryon Road. It’s a car you want to take turns in – where you look around, or don’t, and then put your foot down.

The S-Class Coupe has all the toys you want, too. It has the touchpad for writing in navigation and commands. It has the Active Multi-Contour Seats with hot stone massage capability. It has the Burmester High-End 3D Surround Sound System. In fact, we decided to save time by asking what was missing from the car and found the only thing left to upgrade was the exterior paint color. 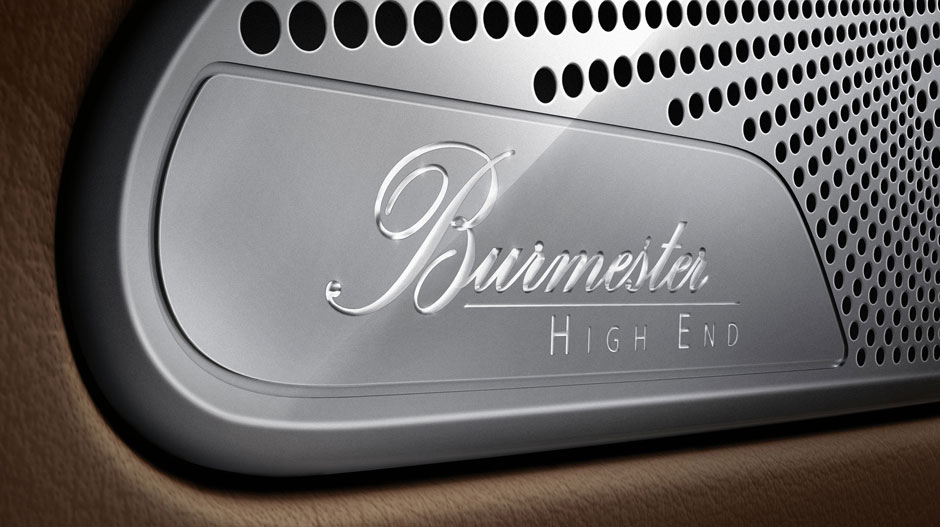 Our initial assessment of this car was accurate, but having actually taken a turn at the wheel, we now know it’s even better than we imagined. This is the perfect daily driver for the S-Class owner looking for a more intimate relationship with the road. If your children have moved out or are driving their own cars now, you’ll want to think about downsizing from the sedan to the coupe. The only other factor that should weigh on your decision is that there will be a convertible version of this car, likely released next year.

The 2015 S550 Coupe is available for test-drives at Mercedes-Benz of Cary now. We’re conveniently located near Raleigh and Durham. Call or visit our website to schedule a time behind the wheel of this or any other new Mercedes-Benz. 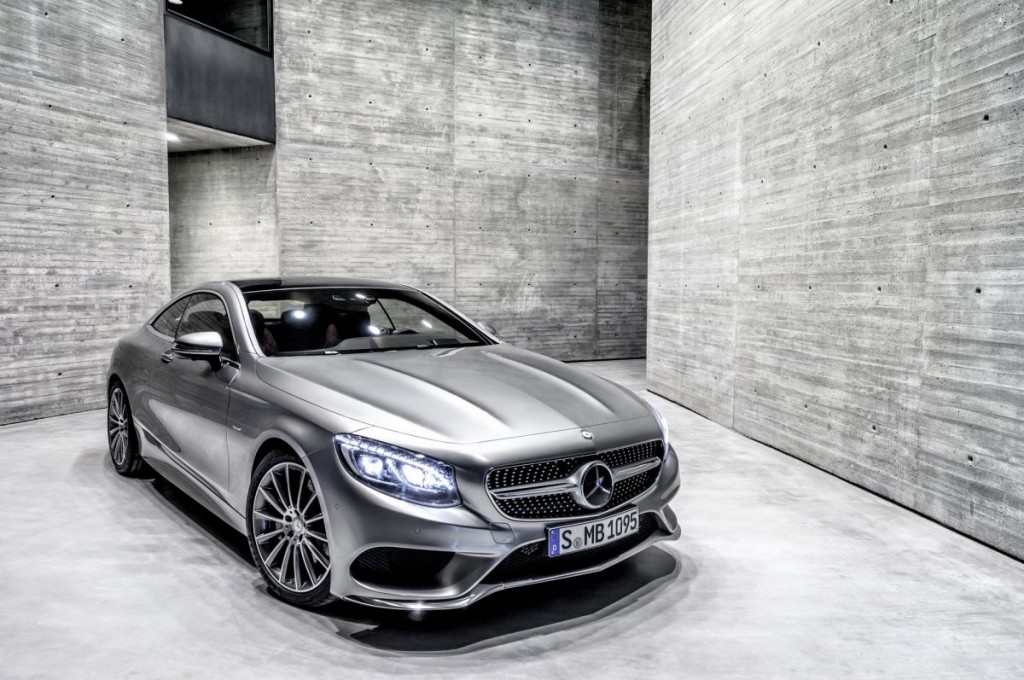